After the drama and excitement of a brilliant 2021 season, Formula 1 is set to provide another thrilling chapter in its constantly evolving story. 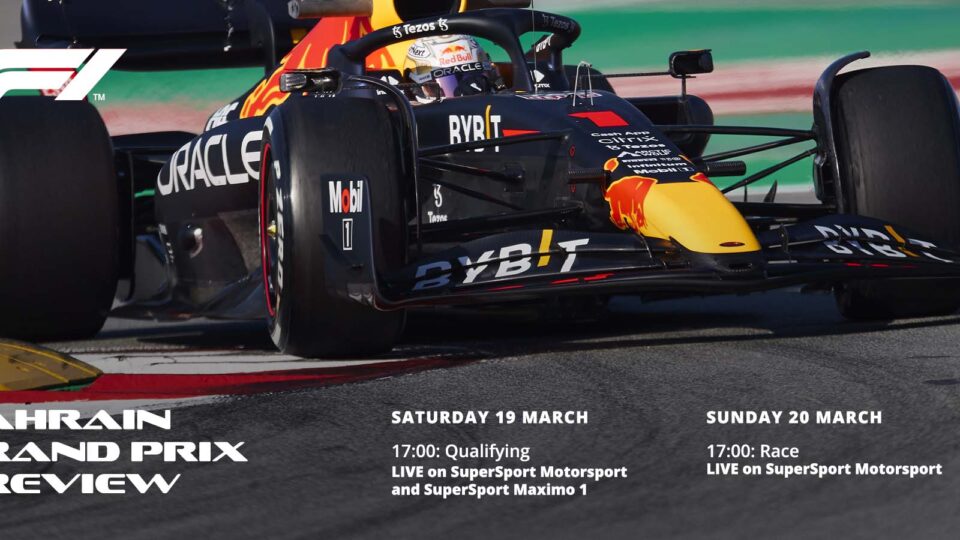 Viewers on DStv can look forward to the first round of the 2022 Formula 1 World Championship, the Bahrain Grand Prix, live from the Bahrain International Circuit in Sakhir on Sunday afternoon 20 March 2022.

SuperSport is definitely your #HomeOfSport and the ultimate destination for motorsport fans.

After the drama and excitement of a brilliant 2021 season, Formula 1 is set to provide another thrilling chapter in its constantly evolving story. The 2022 season sees a major shakeup, with the cars looking noticeably different compared to last year after a slew of new regulations came into effect.

Whether this upsets the established order remains to be seen, though pre-season testing has suggested that the recent dominance of Mercedes and Red Bull is far from guaranteed to continue in this new era.

Reigning World Champion Max Verstappen says he has put all this kind of speculation behind him, claiming that lap times will only matter from Q3 [the final session of qualifying] this coming Saturday.

“I don’t know. I don’t really pay attention to the lap times, we’ll see in Q3 in Bahrain,” said the Dutchman, who later added: “It is difficult to rate but what was positive is that the car was running smooth.

The man most hungry to dethrone Verstappen will be Mercedes’ Lewis Hamilton, who agonisingly missed out on an outright record of eight drivers’ World Championships last season. The Britain is busy adapting to the new cars, but looks set to be one of the front runners yet again.

“It’s been an interesting [testing sessions], not been the easiest or the most smooth running, definitely had some obstacles to overcome,” Hamilton explained. “A little bit behind and the car is a lot different to previous years to drive, as are the tyres, but we are working our way through it.”

Also keep an eye out for a newcomer to F1, Alfa Romeo driver Guanyu Zhou, who is hoping to make a major impact in the world’s premier motorsport series.

“The challenge from my side is to be adapting more, to be feeling more with the car – it’s always the key for the first season,” said the Chinese driver. “As a team, we have to be finding the right solution, finding the right direction to keep improving, keep moving forward in terms of having a strong package for the season, which is very important as well.”

No rival can compete with SuperSport’s coverage. Our viewers on DStv can see all the action from the fastest sport in the world on their Channel of Champions.

Visit www.dstv.com to subscribe or upgrade, and join in on the excitement. And while you’re on the move, you can stream live action on the DStv App.