Football clubs are splashing big money for some of these players to move to their new clubs. 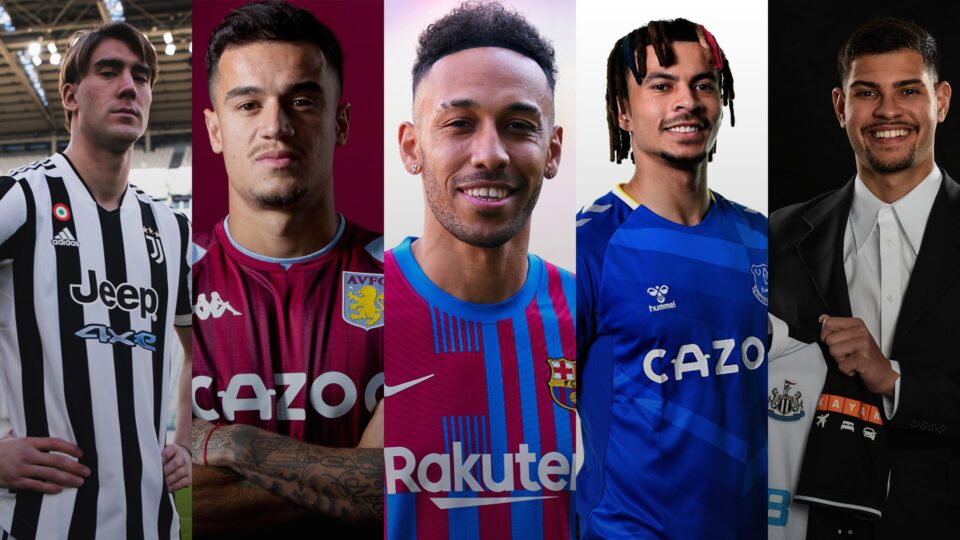 The 25-year-old Swiss International has caught the eye of a host of top clubs over the years with his assured performances in defensive midfield. In the modern game, great defensive midfielders have proved to be a key role. All the top clubs in Europe boast of having world class defensive midfielders, Fabinho, Rodri and Casemiro spring to mind, and Juventus are hoping to follow suit. “La Vecchia Signora” or The Old Lady are known for their shrewdness in the transfer market and this signing is no different. Still only 25, Zakaria could be the perfect solution to Juventus’ midfield problem for the foreseeable future.

After losing their best player to new transfer hotshots Newcastle United, relegation-threatened Burnley had a giant Chris Wood sized hole to fill. In steps Wolfsburg’s Weghorst, a player of the same profile as Wood with a better scoring rate albeit in the Bundesliga. The Dutch International scored 20 goals in 34 games helping his team clinch a fourth placed finish in the 2020/21 season. Known for his impressive poaching ability and prowess in the air (just like Wood), the 29-year-old is bound to improve the struggling team. He could just prove to form a fruitful partnership with fellow newbie Maxwell Cornet who’s been amongst the goals for Burnley.

To call his time at Manchester United horrible would be an understatement. Donny has found it hard to break into the first eleven, even with the new coach Ralf Rangnick preferring Scott McTominay, Fred and Matic in midfield. In 17 months at the Stratford End, he only started 19 games. This is surprising considering just a year before his transfer to United in the summer of 2020, he made the Ballon d’Or Nominee list. With Lampard’s arrival at Merseyside, this could prove to be a transfer that benefits both parties. Perhaps under Lampard’s tutelage, we might just see the Van de Beek we saw week in week out at Ajax.

Just like Donny, Dele Alli has had to move to Everton in search of a new lease of life. He has found it difficult to nail down a starting line up spot due to poor form over the past few seasons. Between 2015 and 2018, at a tender age, Dele showed composure and finesse that belied his youth. Even with the change in management at Spurs, he has not replicated the form he’d shown. Dele was so good, he earned Lampard, his new manager, comparisons due to his rich vein of form in front of goal. Now his manager, Frank Lampard will look to reignite the form that saw him notch 63 goal contributions in his first three seasons.

After a terrible, few months in North London, the former Arsenal captain officially signed for Barcelona on a free transfer. The striker fell out with first team manager Mikel Arteta due to what seemed like disciplinary issues and was even stripped off his captaincy. He joins Xavi’s new look Barcelona and hopes to replicate the form that saw him score 22 goals in two consecutive seasons at Arsenal. He was the highest paid player at the club, earning £350,000 a week. He was of course deserving of this having scored 92 goals in 163 games for the Gunners. Barcelona have been crying for a deadly finisher after the departures of Messi and Suarez and the Gabonese could just be what the doctor ordered.

Colombian winger Luis Diaz has been a wanted man over the past year due to his goal scoring exploits from the flanks. Blessed with blistering pace and excellent dribbling, the Colombian has added goals to his game making him a very tricky customer to opposing defenses. He was top scorer at 2021 Copa America tying at first place with none other than Lionel Messi at 4 goals. He followed up that awesome summer with his former club FC Porto leaving the team as the second top scorer with 14 goals. The Reds fearsome front line gets a face lift and the likes of Sadio Mané and Firmino could face stiff competition for a starting berth.

The Brazilian magician joined his former teammate Steven Gerrard at Aston Villa and has already made an instant impact. On his premier league debut for the Villains, he scored the equalizing goal against Manchester United. This was after he played a pivotal role in their first goal. The 29-year old’s spell at Barcelona has been frustrating but if his cameo against United is anything to go by, he is poised to fill the void left by former captain Jack Grealish. He could just be what Aston Villa need to push for a European place if they do choose to exercise their option to buy him after his loan.

Spanish International Ferran Torres has put in some sparkling performances for club and country both on the wings and at center forward. In his short time at Manchester City, Pep Guardiola often used him up top and he often rewarded the manager’s faith. At Barcelona, he joins what could prove to be a potent attacking force including the likes of fellow new arrival Aubameyang, Memphis Depay, Dembele and teenage sensation, Ansu Fati. He is already into double figures in total goals for his country and is definitely one to watch in the coming seasons.

Former Lyon midfielder Bruno Guimaraes was a wanted man in Europe, and for good reason. He’s the complete midfielder capable of opening up opposing defenses with his line-breaking passes and excellent ball carrying ability. Off the ball, he’s just as adept at making several tackles and interceptions per game. In the top 5 European leagues he ranked in the top 95th percentile for defensive actions per 90. This could be the signing that changes Newcastle’s fortunes with their new owners hoping to replicate what Manchester City did after Sheikh Mansour completed his takeover in 2008.

The diamond of January has to be highly rated striker Dusan Vlahovic. The Serbian has been in rich goal scoring form for Fiorentina and is already the current Serie A top scorer with 17 goals. The 21-year-old is now the third most expensive transfer of the winter window after Phillipe Coutinho and Virgil Van Dijk. Juventus have certainly lacked a constant goal threat since the departure of Cristiano Ronaldo, having only scored 34 goals in 23 matches in the league so far. Juventus vice-captain Paulo Dybala would certainly benefit from playing next to an accomplished finisher and might just convince him to stay at the club past this coming summer. Together with new signing Denis Zakaria, Vlahovic will hope to restore the Old Lady to her former glory.